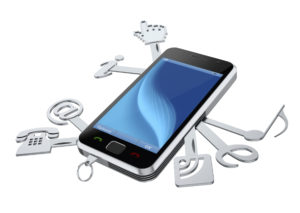 Cell phones have evolved from a simple communication device to a multipurpose tool. For many of us, the thought of leaving home without our smart device is unthinkable. Between using the camera, invoking navigation, or looking up the closest burrito joint, going through your daily grind without your trusted companion would be difficult! Over the years, cell phones have undergone many transformations. Adding useful components and services has increased their utility, keeping consumers satisfied but also desiring more from their devices.

The first cell phone with a camera arrived in 2002. Picture quality wasn’t all that great, as it had a whopping resolution of 0.3 Megapixels (compare that to modern phones, which average around 12 Megapixels). Cameras on phones not only added great functionality, they started a whole new trend – selfies. Smartphones today often have two cameras to make snapping a pic of your own face that much easier. And with resolutions that take astonishingly detailed photos, they actually compete with some high end digital cameras. Smartphones usually have some photo editing capabilities as well, adding to their usefulness as a photo device.

Most modern smartphones can double as a simple flashlight, and I it use this almost daily. By using the same LED lights as the camera flash, smartphones can illuminate a dark passage, closet or cabinet. I have mine configured to turn on when I shake the phone twice, and most phones are capable of having some shortcut configured to easily turn the light on when needed. Just be wary of your battery life, the LED’s can use a lot of juice.

More and more, consumers are adopting electronic payment methods. Apple Pay, Android Pay, and PayPal all allow you to pay for goods or services at point of service, much like a credit card. With fewer people carrying cash these days, it’s hard to split the bill with friends. Enter Venmo (https://venmo.com). Using Venmo, you can give money to friends digitally. It works by transferring funds from your bank account to theirs, and it’s as simple as sending a text message.

You might not give text messaging a second thought, but cell phones made it possible. Like selfies started with the smartphone camera, we can now thank text messaging for emoticons and text speak. Today, text messaging not only serves as a tool to communicate with friends, it has legitimate business uses too. Reminders for appointments, password resets, advertising, even school closures are often sent via text messaging.

Smartphones have access to the latest maps via the internet, and can display satellite imagery of your surroundings. Couple this with GPS location, and you have yourself a navigation system, complete with turn by turn voice prompts.

Future mobile devices have promised exciting new features, and manufacturers are scrambling to be the first ones to offer them.

Samsung, among other companies, have touted flexible screens as the next big revolution in mobile device technology. Having demonstrated the ability to fold a screen almost in two, both size and durability can expect to gain significant enhancements with flexible screen technology.

The latest smartphones undergo countless hours of design to make them aesthetically pleasing. As our younger generation incorporates this into their style, wearable devices will undoubtedly become a bigger part of our culture. Smartwatches have already taken hold, but integrating wearable tech into jewelry and clothing is already being explored.

As more and more electronics are made “smart”, your smartphone will become the hub of control. From coffee makers to your car, it’s already possible to pair your device and extend some control over them. Manufacturers are integrating command and control features into their products, with the idea of making them more functional and convenient for users. Now if my smartphone can just take the dog for a walk, I’ll be all set!