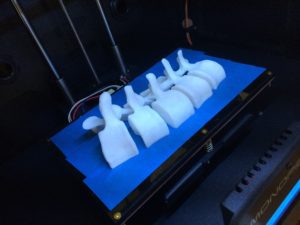 In a world where instant gratification is commonplace, we continually develop new ways to achieve it. We design and build technology to support our needs, and always look for a better and faster way to accomplish a task. Instant messaging, instant streaming video, instant photos, the list goes on and on. Now, we can instantly make everyday objects with 3D printing.

3D printing technology has actually been around for more than two decades, but priced out of reach for most of us. Recently, it’s gained new ground in the consumer marketplace as prices have fallen dramatically, and technology improved to new levels. Home users can purchase a 3D printer, connect it to a computer and start printing right away. 3D printers work by adding (printing) layers of material on top of one another. As these layers build up, a shape emerges. The shape is based off a 3D model that can be created from scratch, or based off a real object.

The model is the starting point for printing an object on a 3D printer. A model can be created using CAD (computer aided design) software, or by scanning an object with a 3D scanner (3D scanners scan objects by width, height and depth and convert those to measurements) or by taking photos and analyzing those with specialized software. Once the model is obtained, it’s converted to a 3D printer file. The conversion process takes into account certain requirements for 3D printing – such as gaps or areas where the material might not print correctly. Once the model is confirmed, the software slices up the design into many thin layers and creates the instruction for the printer.

The materials and techniques that 3D printers use varies. Many consumer 3D printers use a technique known as extrusion. Plastic wire is slowly fed from a coil or spool into the print head. Heat is applied to melt the material enough so it can be deposited onto the shape. Similar to a hot glue gun, only on a precision scale. Printing an object can take hours or days, depending on the complexity.

Metal is another material that can be printed, and can create stronger objects. 3D metal printing can use an additive method, rather than an extrusion method, to create complex designs. Metal powder is deposited on a workspace, and a precision laser beam heats it to its melting point. This process is repeated until the object is formed. The costs to create objects can be far less with this technology, saving manufacturers both time and money.

Some of the most exciting uses for 3D printing isn’t about creating household objects. In the medical field, this technology is poised to revolutionize patient care. Prosthetics can be printed to quickly and precisely fit the patient, and at far less cost than todays custom models. Multiple parts can be assembled to create limbs complete with moveable joints. Scientists are also developing a 3D printer that can print human tissue. Scientists harvest cells and allow them to multiply in a petri dish. Using the cells as a type of ink, they can already print tissue and portions of organs. They hope to someday print entire human organs, which would allow for transplant recipients to receive organs that are less likely to be rejected – since they would be created from their own cells.

Another area of 3D printing that has people hungry is meal preparation. There are already functional food printers that can create entire meals from scratch. In one design, various ingredients are loaded into stainless steel vessels. The user selects the meal type or designs their own on a computer, and the device does the rest. As ingredients are combined, each layer is created. In a cookie, for example, the base layer may be the dough, then the filling, followed by another dough layer and sugar sprinkles. And given that a machine can be much more precise – or create concoctions that no human could – foodies will enjoy a whole new realm of taste sensations. Companies imagine that food printers could be as commonplace as the microwave – another technological marvel that changed how we prepare meals. Prepackaged food could be loaded like an ink cartridge – I just hope they aren’t as expensive!

Architects are finding that 3D printers can produce precise models in very little time. What used to be a time consuming and complex undertaking, architectural models of buildings allow the customer to see a lifelike replica of their investment, and architects can correct potential design flaws before they become costly mistakes.

Sometimes, you need a part to fix something. While this may not be an issue at home, if you’re 300 miles out to sea – or orbiting the earth on a spaceship – it could be a real problem. 3D printers can create that much needed part, even allowing an engineer hundreds of miles away to design the part and email the file. All the recipient needs to do is load the file in the 3D print software and click “print”. Just don’t accidentally print too many copies!