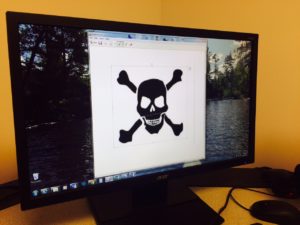 Malware. It’s the new dirty word and it’s costing individuals and businesses time, money, and frustration. Malware, which is short for malicious software, is defined as any software designed to crash, disrupt, or otherwise cause undesired effects on one’s computer system. Essentially, malware is a little program that runs on your computer, and it carries out pre-programmed commands that perform different tasks. It may consume memory and slow down your computer, or it might steal your passwords. Viruses, trojans, spyware, and ransomware all fall under the blanket term of malware, but each one has its own specific behavior and goal.

Viruses are the original malware, dating back almost as far as computers themselves. Largely a nuisance until the late 90’s, viruses started becoming more and more widespread and doing real damage to computers. The main goal of a computer virus is infect a computer and delete or alter files causing programs to crash. Computer viruses, much like human viruses, also replicate to survive. They might hijack your email and send themselves to your contacts, or infect commonly shared files such as Word or Excel documents. Using up-to-date antivirus, a modern operating system using Windows Updates, and practicing safe computing habits can help prevent infections. Don’t open email attachments from senders you don’t know, and don’t open unexpected email attachments from senders you DO know. Also, don’t download software programs from the internet unless you know they are safe.

Trojans are malicious programs designed to appear innocent or routine, thereby fooling the user into installing or running them. They might display a funny message, or claim to be a game. Unfortunately, their purpose is much more sinister. Named for the famous horse used by the Greeks to invade Troy, trojans may contain any number of viruses, depending on the exact variant. Most Trojans don’t alter files, or try to replicate. Their payload is typically designed to allow remote access by an attacker, who can then take control of your computer, or download more viruses to it. As for defense, following the same prevention methods as you would for viruses applies here.

A worm is malicious software that propagates itself over computer networks, spreading from one computer to another through security holes in unpatched computer systems. Worms typically require no interaction from a user, allowing them to easily infect an unprotected computer. While their payload may vary, worms often cause your network to slow down through their efforts to propagate across the system, consuming bandwidth. Like trojans, once infected the work may download other viruses that allow remote access. Using firewalls, patching your computer using Windows Updates and keeping up-to-date antivirus are your best defense against computer worms.

Ransomware is where the real pain starts, because it can affect your wallet. When a computer gets infected with ransomware, the software will begin encrypting files – meaning it scrambles the contents making them useless – and displays a warning with a timer counting down. Pay the ransom before time runs out, or lose your files forever. Ransomware is smart, and it knows what files are valuable and what files aren’t. It knows that your word documents, QuickBooks database and other common business applications are important. In addition to the above recommendations, your best defense here is to follow safe computing practices. Don’t open email attachments from senders you don’t know, and don’t open unexpected email attachments from senders you DO know. Make sure you backup your files regularly, and always keep your computer updated with Windows Updates.

Spyware is yet another form of malicious software, although its purpose is to steal your information or track your browsing habits. Spyware is most often installed along with software you may have legitimately wanted. Programs that claim to fix or speed up your computer like “PC Optimizer” or “RegClean Pro”, or software to download pirated movies are typically laden with spyware. Browser toolbars, unwanted search results when searching a topic, or random and constant pop-ups are all signs you may be infected. In addition to stealing your information, spyware can slow your computer down. Because spyware doesn’t attempt to replicate, it’s not considered a virus by definition. Running up to date antivirus, keeping your computer system updated and not downloading unfamiliar programs from the internet are good tactics to avoid spyware.

Although spyware and ransomware are considered malware, they sometimes goes under the radar of antivirus software. They are classified differently, and behave in a different manner – making detection difficult. Anti-malware software, such as Malwarebytes Anti-malware (https://www.malwarebytes.org/) is designed to detect and remove these types of threats. The free version of Malwarebytes allows you to run scans manually and remove anything that’s already infected your computer. The paid version enables something called “on-access” scanning, meaning that it’s inspecting every step your computer makes. On-access scanning will catch things before they infect your computer, making it a very useful tool in the battle against malware.

Up to Date Protection

Keeping your computer updated with Windows Updates, using up to date antivirus software, and using anti-malware software are crucial to beating malware. Practicing safe computing habits such as not opening attachments from unknown senders, not opening unexpected attachments from known senders, or clicking links in emails that you weren’t expecting are just a few of the techniques you can use to prevent infections.