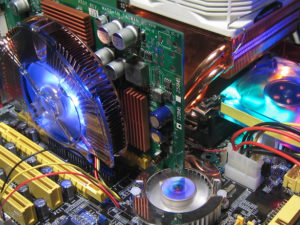 The Necessity of PC Repair

We can all agree that having a computer problem is frustrating. Whether it’s acting slow, freezing up or just plain broken, when an essential tool is damaged, it’s a major inconvenience. Computer PC Repair can range from simple maintenance tasks to a complete overhaul of the system. Every scenario is different, but many of the steps to repair it are common.

For most PC repair jobs, diagnosis is the first step. After all, if you don’t know what the problem is, you can’t fix it! When a computer comes into our shop, we begin with our standard diagnostic steps. First, will it even turn on? A computer that won’t turn usually means a part called the power supply has failed. The power supply is what converts your common household power outlet voltage to something the computer can use, most often 12 volts. Power supply failures are pretty common, and can be caused by voltage surges or drops, as well as defective internals. Fortunately, replacing them is relatively easy and will get you back in business in no time.

If the computer turns on but won’t load the operating system, it’s time for the next step. Is the problem hardware, or software? We use a software application that runs independent of the computer’s operating system – so even if the system won’t load Windows, we can bypass that and test the hardware. System memory, CPU, hard drive and motherboard components are all required for a computer to function. These parts are tested by the software and a report is generated. Based on this report, the next step is replacement of any failed components.

If the computer loads the operating system, but exhibits slow behavior or random crashes, it’s time to look a little deeper. First, it’s important not to overlook the obvious. Is the inside of the computer caked with dust, causing heat to buildup on the internals? Are all fans spinning freely? Heat is the computers enemy, so having good airflow to cool the system is essential to stable operation – and more than once has caused the dreaded “blue screen or death” or “freezing mouse cursor”. Cleaning the inside or replacing any burned out fans will quickly tell us if this was the main problem, or just a factor in the issue at hand.

If the computer is clean inside, then the diagnostic software comes out again. Strenuous tests can be run that put the computer under a load, which may cause a component that is randomly failing to show up. First, memory tests. Faulty system memory, or RAM, is something that can cause random crashes, freezing, and errors. Memory is made up of physical addresses, where the computer can read and write information to. It’s possible that just a portion of the memory is bad, but it would be impossible to tell this without intense scanning. The diagnostic software will thoroughly test all memory addresses, and determine if a portion of the memory is bad.

CPU, which stands for central processing unit, is the “brain” of the computer. It’s responsible for computing commands, and failure can cause many of the symptoms mention above. Again, the diagnostic software can stress test the CPU and determine if it’s failing.

The hard drive is where your computer stores information. As you use the computer, data is constantly read and written to this device. A failure here can cause freezing, random crashes or sluggish overall behavior – as if your computer is working in slow motion. The diagnostic software will test the hard drive, and also read hidden information about its performance to determine if a failure is imminent. If the hard drive is still operational, it may be possible to recover all your data and programs and place them on a new hard drive. If the drive has failed, you may need to recover any data from backup.

Finally the motherboard, or system board, is responsible for connecting all the other components together. Failure here is usually when replacement of the computer is suggested, based on costs and availability or components.

If all hardware tests pass, then its time to dig deeper still. Full malware scans are run, to determine if something is installed that shouldn’t be. Malware can cause a computer to freeze, load slowly or crash your browser and other programs.

If malware scans come back clean, and no other indications of problems are found, its time to format the drive and reload the operating system. Formatting is a process where all information is erased from the hard drive, which allows a fresh installation of the system to take place. While this may seem like a drastic step, it’s actually quite common. Think of it as rebuilding a car engine. It will be almost like new. Generally, it’s the most economical way to fix a problem that isn’t easily found.

So why does it take so long to run these computer diagnostics? Well, for the most part, the diagnostics are started and allowed to run unsupervised. It may take several hours for any one of these tests to complete, and they can’t always be run simultaneously. A technician will return to the computer and start the next phase of testing, which can take several more hours. The benefit is that your computer will have a clean bill of health. While it takes time to perform a successful repair, having a thorough job performed important to keeping your computer running well.