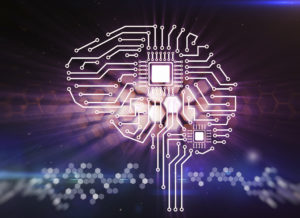 From the dawn of computing, programmers have been trying to make computers smarter than us. Traditionally, this was done by programming an application to mimic human thought. Over time, this programming evolved into artificial intelligence.
Artificial intelligence (AI for short) is simply the development of computer systems capable of human-like thought, reasoning, decision making, and most importantly learning. It’s a common belief that advanced AI could one day outpace human intelligence. While Hollywood has done a good job of taking this to the extreme, systems today aren’t capable of global destruction all alone. At least not yet.

Artificial Intelligence In Your Everyday Life

Before you start worrying about robots taking over the planet, keep in mind that we already deal with very simple artificial intelligence on a daily basis. Apple’s Siri and Googles “OK Google” are two simple AI programs that many people use. These programs receive verbal or typed input and try to provide you with useful information. For example, asking “where can I get a burger” might return a list of nearby restaurants, along with a link to a map or phone number. You may not have asked how to get there, but intelligence built into the program figures you probably want to get there. Additionally, both platforms will learn as they go. If you speak a command, and the device misunderstands you – you can edit and correct the text. The next time you utter the command, it will remember your correction and likely be spot-on.
In the automotive world, artificial intelligence has been in development for some time. New technologies such as predictive braking will become standard safety features in the coming years. This technology use cameras, lasers and sensors to automatically apply the brakes when sensing a potential hazard. Self-driving cars are rapidly advancing in technology, and will likely be available in the next decade. Google’s prototype vehicles have chalked up almost 2 million miles with only a few accidents, statistically making them safer than a human driver. In Californian, the AI in Googles self-driving car qualifies as a legal driver!

Artificial intelligence being developed by Googles DeepMind group recently accomplished a huge milestone – beating a professional player at the Chinese game Go. The game is unique with an astronomical number of moves possible, and a computer program had never been able to beat a professional human player. Played mostly by intuition, the game is less mathematical and more about learning the other players moves. Taking this approach, DeepMind was able to construct a program that learned new strategies itself. After playing numerous games, it was able to predict a human players move 57% of the time. After even more training, it bested a professional player.

Not Ready for Prime Time

Artificial intelligence is still in its infancy, and by no means is it perfect. Microsoft recently revealed a chat bot named Tay, targeted at 18 to 24-year-old users who make up a large demographic of social media. Chat bots are computer programs designed to interact with you socially through Facebook, Twitter and other messaging platforms. Designed with some intelligence, chat bots will respond to conversation and interact at a pretty realistic level. Unfortunately, Tay had a few glitches. Before long, some malicious users had managed to turn her tweets into racist rants and statements of illegal activities. Apparently, Tay would repeat anything you wanted by simply Tweeting to him “repeat after me”. Microsoft quickly shut her down, apologizing and admitting they had a little work to do.

Some prominent figures in technology have voiced concern about AI. While not opposed to research, they warn that AI needs to have responsible oversite to reduce inherit risks. Proper failsafe’s and safety measures need to be employed. As the technology improves and becomes more aware, the potential for unintended consequences goes up. Some have said it could potentially be more dangerous than nuclear weapons. These risks need to be considered and understood in order to obtain the results we desire from AI.
Over time, artificial intelligence is certain to grow and integrate with many existing technologies. In the near future, enhancements to the devices we interact with on a daily basis will start to show the real potential of artificial intelligence.