Top 8 Reasons For Your Slow Computer 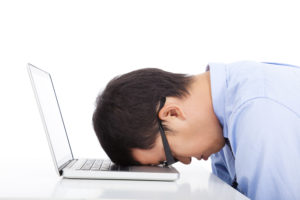 I recently worked on an extremely slow computer. Starting it up took forever, and once I logged in I had to wait several minutes before any programs would open. Even after the program was open, maneuvering around was dreadful. When I mentioned the them how frustrating it must be working on the computer, they explained it had been like that for a while, but they had learned to deal with it. I guess their patience level far surpassed mine, as I found myself contemplating ways to creatively celebrate that computers last day on earth.

There are a variety of reasons why you may suddenly find yourself with a slow computer and most often the issue is indicative of more serious trouble.

Probably the biggest culprit when it comes to slow computers, malware infections will slow your computer way down. Malware comes in many forms, often manifesting itself as a browser toolbar, fake antivirus or a “helpful” utility that claims to cleanup your computer. Once installed, these poorly written programs can consume memory and disk activity. They also may attempt to spread, which in turn uses portions of the computers processor and memory. This results in a sluggish computer, and potentially worse issues like identity theft or data loss. Keeping up to date antivirus and using a malware scanner such as MalwareBytes can prevent and also detect these types of programs.

The hard drive is failing

The hard drive is a part inside the computer where information is kept. Data is retrieved (read) and stored (written) constantly while in use. Its one of the few mechanical parts of a computer. When it starts to fail, your computer may need to repetitively read and write before the hard drive successfully completes the task. This can cause a computer to freeze up or run very slow. There are tests a technician can perform to see if the hard drive is failing, and it’s a good idea to replace it before it does. If the hard drive fails, you may not be able to recover the data stored on it.

Computers generate heat as they operate. Fans inside the computer bring cool air in and exhaust the hot air. If your vents are clogged, or a fan isn’t spinning, the computer will overheat. This can cause the dreaded “blue screen of death”, a slow computer and other unexpected behaviors. If you have cats or dogs, this is especially true.

We could all use a little more memory, and your computer is no exception. RAM (random access memory) is where your computer stores information temporarily for quick access. The more programs you have open, or the more intensive the program is, the more RAM memory will be used. Memory is measured in gigabytes (GB), like hard drives and other storage devices. Often, an older computer can have its memory upgraded to help improve performance relatively inexpensively.

Too many programs running

The cute screensaver you downloaded, the animated cursors you have running, the random background pictures that change automatically – these programs run in the background and take up resources. Go into the control panel, and open Programs and Features. A list of all the programs installed on your computer will show up, and you can remove anything you no longer want or use. Computer technicians can also perform a “tune up”, where unnecessary programs are kept from starting up when the computer first turns on.

My first response when somebody asks “hey, my computer is doing this weird thing” is “Did you reboot”? Rebooting lets the computer reload all its programs, and will often speed it up or solve your random glitch.

Your internet speed is too slow

If you live in a household with a group of people, or have a business with multiple users, chances are they use the internet at the same time. Streaming video, image intensive websites and cloud file access all consume a portion of your internet connection. As more services move to the cloud, your connection may start to strain under the load. Internet bandwidth is measured and sold in Mbps, which is a measure of the capacity. To test the internet speed on your slow computer, go to http://www.speedtest.net/ and click “Begin Test”. If it doesn’t come close to the level of service you are paying for, you may want to look at your network equipment or possibly upgrade your bandwidth.

Your slow computer is old

Sometimes, there is no other explanation for your slow computer other than age. Home computers have a useful lifespan of about 6 years. Business computers are typically 4 years or less. When a computer reaches the end of its useful life, it may still operate well – but chances are you’re starting to notice its limitations. Also, technology changes at a pace where programs need faster computers to work properly. After a number of years, the computer just won’t be able to handle it.